Chuck Stalley, Ride Director of the Tevis Cup, has indicated that any riders wishing to have their EDRA distance miles (within Tevis qualification guidelines) be used towards qualifying for the Tevis need to send their ride results/records to Chuck Stalley at pstalley@yahoo.com. Additionally, Ride Managers may also make the request to Chuck in advance of their event so that riders can plan their rides accordingly. 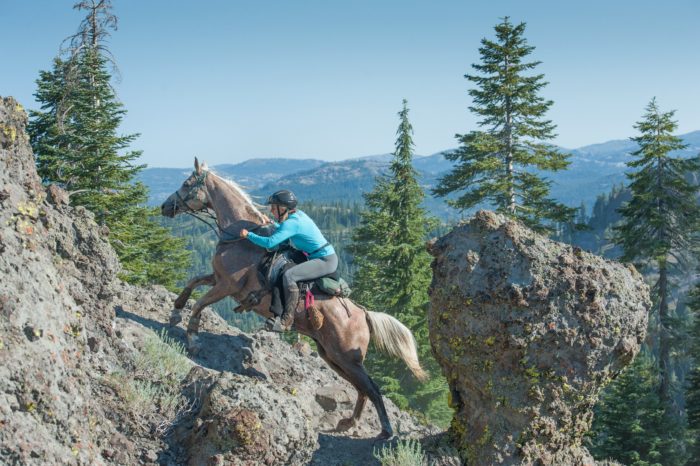 Riders can learn more about the Tevis Cup requirements here. For EDRA Ride Calendar and to plan your ride season, click here.

About Tevis Cup (excerpt from Teviscup.org)

The Western States Trail Ride, popularly called the Tevis Cup Ride, is the oldest modern day endurance ride, having been held annually since 1955. As such, it has been the inspiration and model for the most challenging endurance rides worldwide.

The ride was first organized by Wendell Robie, an Auburn businessman and devoted rider of the Sierra high country. Many people in the 50s doubted that any modern-day horse could cover the rugged trail from Lake Tahoe to Auburn in a single day. Wendell and a few of his friends proved them wrong in August of 1955. He continued to hold the ride annually thereafter and organized the Western States Trail Foundation to preserve the 100 mile trail and the Ride.

Each rider who completes the 100 mile course from Tahoe to Auburn within the 24 hour limit and whose mount is judged “fit to continue” is awarded the coveted silver Completion Award Buckle.

The Tevis Cup trophy is awarded to the person who completes the 100-Mile One-Day course in the shortest amount of time and whose horse is in sound condition and “fit to continue.” The Tevis Cup was named for Lloyd Tevis (1824 – 1899) by his grandson Will Tevis, a prominent San Francisco businessman and early benefactor of the Ride, and was first awarded in 1959 to Nick Mansfield, riding Buffalo Bill, an eleven year old TB Cross gelding.

The other major trophy, the Haggin Cup, is awarded to the rider whose horse is in the “most superior physical condition” of the first ten horses to cross the finish line. The Haggin Cup, named for James Ben Ali Haggin (1821 – 1914), was first awarded in 1964 to Paige Harper, riding his six year old Arabian gelding, Keno.

“The James Ben Ali Haggin Cup shall be awarded by the Cup Committee to the horse among the first ten to finish judged to be in the most superior physical condition by the Veterinary Committee. The rider must have exhibited a level of horsemanship and sportsmanship equal to the prestige of the award as judged by the Cup Committee during the competition to be eligible to present for the Haggin Cup”.

The Josephine Stedem Scripps Foundation Cup was established in 1994 to recognize each of the finishing Junior Riders for their special achievement. The first Junior finisher was David Jay, Jr., who completed the 3rd annual Ride in 1957.