Ride Photos can be found here.

(April 7, 2018 Spokane, WA) – The rain was coming down in sheets. In that special way that rain falls in spring – torrential, driving.

And that was how it was on Saturday morning as a hardy group of distance riders set out on the well-marked course for the start of the Equine Distance Riding Association (EDRA) season.

“We were soaked down to the knickers,” Robin Burns declared after the ride. “I’ve never seen so many happy riders and volunteers, though.”

And among the group of happy riders was one small girl. Nine-year-old Miss Georgia on her trusty horse Gracie. It would be her first 25 mile ride and Erin Putnam had stepped up to sponsor the youngster. 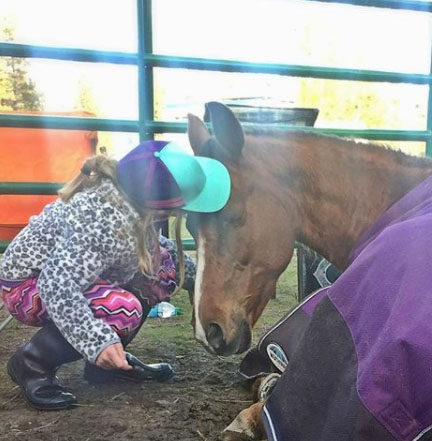 Georgia and her American Blazer, Gracie. Photo by Brian Dirks.

“The trails at Riverside State Park are special to me. After over a year of disappointments and frustrations with horses that weren’t the right fit for endurance, Oreo and I completed our first 25 mile ride at April Daze in 2015. At Crazy Days in September of 2016, Terry James and Bucky escorted us through our first 50. At the April 7, 2018, Crazy Daze, Oreo and I had the privilege of escorting nine-year-old Georgia Glidden and her horse Gracie through their first 25. When Georgia’s mentor, Jennifer Kaplan, mentioned at the EDRA Convention that a 9YO girl had joined without her parents, I was intrigued. When Jennifer later posted that she was looking for someone to sponsor the girl at April Daze, I thought, “Why not?” I and Margie Woodford and Shannon Peckham were already planning to do a turtle pace 25, so let’s check this out,” wrote Erin.

“Georgia and I went out for a test ride on Friday afternoon, and we learned that we had the potential to be a great team. Then it was the l-o-n-g wait until 8am start time! Georgia has the blessing of a very supportive family, so she and Gracie had more crew than most of the rest of us put together! Despite the cold rain, we hadn’t even made it back to camp before Georgia was asking me if she could ride with me again. Georgia and Gracie finished with flying colors.”

According to Georgia’s mentor, Jennifer Kaplan, “Georgia is hooked and I just spoke with her dad, Brian and sounds like he has the bug too. He’s aiming for Selkirk.”

The trails were well marked despite attempted trail sabotage on Friday and the rains on Saturday. Riders were able to follow the route with the GAIA app but most found they didn’t need it with ample amounts of chalk and ribbon showing the way.

One person grateful for the well-marked trails was Lynn Atcheson who took first in the fifty mile and Best In Class. 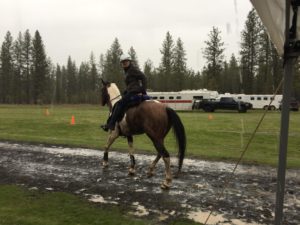 A wet Lynn and Banner head out for another loop relaxed in a halter. Photo by Heidi Taggart Larson.

In her own words, “I’m notorious for always getting lost,” Lynn laughed. So with the first few loops she tracked behind Sue and Dennis Summer before swinging to the front with her horse knowing the way.

She finished in a time of 5:05 on a fit and happy Banner. Banner is a gelding of unknown age and origin, although best guess puts him about 16 and perhaps an Arab cross. This was his first victory in a 50 miler although he gave indication of his talent two years ago when he took first in the 30 mile Prineville Ride. He’s consistently Top Ten but it wasn’t until Lynn’s friend Jamie Hughes encouraged her to step up to a fifty that the pair really started to shine.

“I had to be talked into doing one,” said Lynn. “It was hard, I did a lot of walking and crying before I finished.” 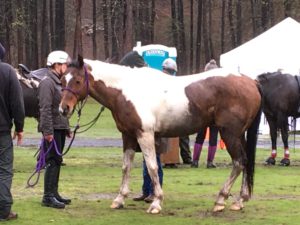 But finish they did, and after a mild winter in the Gorge area of Washington and solid conditioning on the hills surrounding the Columbia River they were ready for April Daze. Lynn attributed the 3,500’+ elevation changes in her conditioning rides as a big part of Banner’s fitness.

“50’s are getting easier, but they are still hard,” said Lynn. “We’ll do another 50 at Grizzly, but I’m only going if I get some real rain gear!”

Want to join Lynn at Grizzly? Be sure to check out the ride page here. Grizzly Mountain is Saturday, April 21, 2018.